It saddens me that so many college students today take on such large amounts of debt.

Students graduating from college are now walking away with more debt than ever – over $30,000 on average.

CNN has an emotional and poignant short video about the reality of paying back this debt and what it actually looks like in the real world.

When it comes to how you go about paying for your college experience and education, you need to be informed when choosing two within the trio of good, fast and cheap. 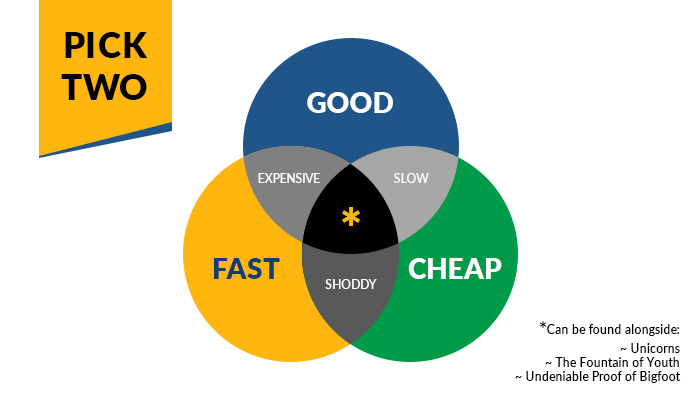 Not too many years ago I began my college career. I took 12 credit hours each semester while working 30 hours a week to maintain an income to pay for tuition and fees, housing and food. I didn’t spend much for entertainment or recreation. This meant not eating out much and generally finding cheap recreational alternatives to more expensive ones.

You don’t have to live like you did under your parents (if you were well off). You can live meagerly for a time, saving money and preparing for your future.

I had this philosophy throughout my entire undergraduate career. And I was able to graduate debt free from a state university.

I was able to accomplish this because of two primary reasons: first, I took general education classes at an affordable community college and not an expensive state or private institution; and second, I paid in-state tuition rates. Here’s what that looked like.

I began my college career at a community college. Here I took many of my general education classes, which were required for any degree in any field.

During this time I was working at a non-profit and not making lots of money, but I was able to pay for this schooling out of pocket and not take out any loans.  The tuition costs were relatively low because I had established residency and was able to pay in-state rates. Residency requirements can vary by state, so check the requirements for the state where you plan to attend college.

When I finished at the community college I was debt free.

My First Experience at a State University

A few years into my college career I had a transition to another state. I waited a year to take classes so I could get in-state rates. If I had not done the waiting here, I would have paid much higher rates. During my “year off” from school I worked full-time, saving my money in every area I could.

While at the state university I finished many of my general education classes and began taking classes specific to my major.

When I finished at the state university I was still debt free because I had continued working and had paid the less expensive in-state tuition rates.

Lastly, I had another transition and finished at another state university. Again, I waited for a year, established residency and started attending classes again at the cheaper in-state rate. While at this university I worked as a “student worker,” which helped pay the bills.

It was here that I took a few remaining general education classes and the majority of classes specific to my major.

When I graduated, I had paid all my bills and was debt free.

Was it easy? Certainly not.

Were there times I wish I could have sped things up? Yep.

In the end, it took me 8 years to complete a 4-year degree. But I didn’t have any debt when I was done. This is the intersection of the Good and Cheap circles.

Let’s just look at an alternative for a minute.

Let’s say I did everything in 4 years and didn’t work any outside jobs except maybe through the summer months, earning minimum wages to cover basic summer expenses.

So, in our intersection from above (Good, Fast, Cheap) we now choose Good and Fast. 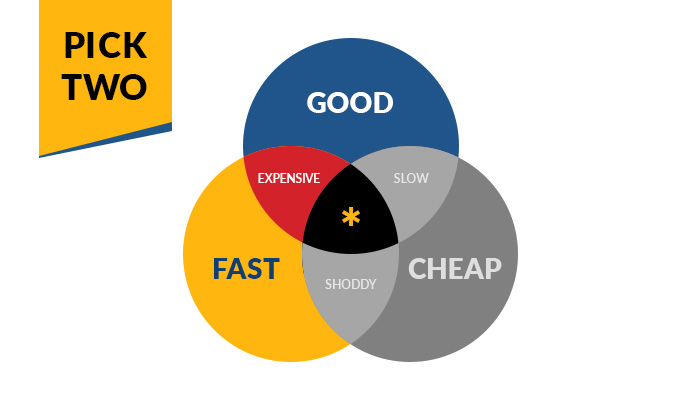 Now let’s use a student loan calculator to see how long it will take to pay back our debt and what those payments will look like. I used the loan amount of $99,720 and an interest rate of 6%.

Note: Your rate and debt load will probably be different, so use the link above to customize your payback period and monthly payment.

Here’s what mine would have looked like had I chosen this alternative plan.

Even the $714.43 is a huge chunk of monthly income. If you already have a car payment or are thinking of a house payment, that $714.43 may still be a showstopper.

This type of debt can be crushing to your future plans. So be smart when considering what college you’ll go to and how you’ll pay for it.

Here are the steps I’d like you to consider:

It is possible, you can graduate debt free!

Jason Weed is married and has three highly energized kiddos.

Since 1998, most of his career has been spent working for Christian non-profits, helping them communicate clearly to, and creating better experiences for, their customers in the digital space.

In his off time, Jason enjoys playing disc golf, playing games and hiking outdoors with his family.

Sign-up to receive an email when new articles are released from BetterCollegeStudent.com.

You have Successfully Subscribed!

We won't sell or give away your info, ever. This is for new article notifications and major announcements only, promise.

Is there a topic that you’d like to see written about? Let us know below.

This does not add you to an email list. This is for contacting us about adding a new college topic only, promise.